Dewalt is an American power tool brand that is manufacturing exceptional and high-grade tools for a while now. The impressive quality is one of the main reasons why this brand is trusted widely. The company understands the aspects of wood cutting.

Working with wood is quite technical and a demanding task; hence, owning the right tool is crucial. In the case of crosscuts and miter cuts, a miter saw is an ideal tool. However, selecting the correct miter saw can also be quite confusing due to a vast range of miter saws available.

A miter saw allows the user to tackle various types of cuts, including miter cuts and crosscuts with appreciable precision. Not only this, a miter saw is the essential power tool that is easily found in almost every work area. The reason behind this could be a great cutting capacity and efficiency.

The Dewalt has produced and released several identical power-tools with very slight differences and variations that cannot be determined just by looking at the saws. Same goes for the Dewalt DWS709 and the DeWalt DWS779 miter saws. They might look quite the same by the apparent design, but they do hold some significant features that make them different from each other.

To understand the differences between both the great miter saws, we have provided all the necessary information and comparison between them in this article. Let us go through the Dewalt DWS709 VS DeWalt DWS779 miter saw review:

The DeWalt DWS709 is a dominated 12-inch sliding compound miter saw that has a high powered 15Amp motor that generates up to 3800Rpm for highly refined and smooth cuts. This corded miter saw has a lightweight frame yet enhanced durability.

This sliding compound miter saw provides ultimately extended cuts through several materials, whether thick or thin. It features a 12-inch blade with a stainless steel plate with 32 teeth that are ideal for maintaining a clean cut on the hardwood.

You can quickly achieve bevel cuts by tilting the blade up to 49 degrees left or right. It can also create miter cuts 60 degrees to the right and 50 degrees to the left. Due to its visible and large bevel scale, the accuracy of the cuts is guaranteed.

The DeWalt miter saw has an impressive cutting range. The excellent back fence design can cut 2×14″ dimensional lumber at 90 degrees, and 2×10″ dimensional lumber at 45 degrees. Moreover, the fantastic tool can cut 5.5″ nested crown molding and base molding of up to 4.5″ vertically when positioned on a fence.

It has a high-quality miter detent plate with nearly 13 positive stops at the most common angles. It provides unmatched accuracy in the cuts. While having an ergonomic design, the tool is very portable. The cam miter lock ensures you achieve repeated accurate cuts with easy adjustments.

Additionally, the excellent miter saw includes a material clamp, blade guard, wrench and a dust bag. However, the fence might show few issues and the model omits a laser-cut for further accurate cuts. 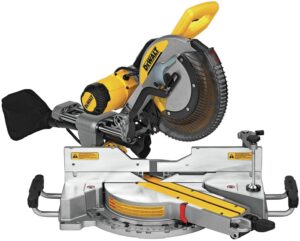 The DeWalt DWS779 miter saw is the second most recommended miter saw by DeWalt. It is a 12-inch sliding compound miter saw that features a robust 15Amp motor powered by 3800Rpm for ultimate durability and accuracy. The high power motor enhances cutting performance.

It is a corded miter saw with a 12″ stainless steel carbide blade that provides straight, accurate and fair cuts in no time. This tool looks bulkier but has several significant upgrades. Due to the stability provided by this tool, it is considered ideal for all sort of heavy-duty work.

The DeWalt DWS779 offers more control to the operator by the power switch on the handle. Also, this miter saw is ideal for cutting wood, metal and plastic with a double bevel sliding mechanism. This tool ensures increased cutting capacity.

The vast range cutting capacity of this saw includes cutting bevels at both sides. It has miter cut capacity of 60 degrees to the right and 50 degrees to left. The exclusive back fence design is ideal for cutting a 2×16″ lumber at 90 degrees also, 2×12″ lumber at 45 degrees.

It can also perform cuts of 7.5 inches thick nested crown mouldings and 6.75 inches thick vertically when placed on the fence. This power tool has a clear and visible bevel scale for precise reading and cuts. The durable clamping mechanism of this saw along with two steel made horizontal rails increase cutting accuracy.

Additionally, the miter saw includes a strong transparent blade guard for easy replacement of blades and an integrated dust collecting system. However, it does not feature a laser guide for easier cutline adjustments and cutting.

These two models by DeWalt are the same when you look at them, but they do have some differences and variations that are hard to determine without reading the specifications. These significant functions make them stand out from each other.

Almost every miter saw performs similar functions, but they are not designed completely the same. The strategic manufacturers do leave some room for improvement.

The significant differences between the DWS709 and DWS779 miter saws are:

Most miter saws are heavier in weight because they are usually used for steady heavy work. It is considered that the more massive the saw is, the more fixed and stable it may be.

The DWS779 miter saw weighs around 67 lbs which are proven to be an ideal weight when it comes to cutting accurately even through the most challenging cuts without shaking from its place. Due to its slightly heavyweight and robust build, it can get and pretty hard to move around and may make it obligatory for you to use it from one static place. Moreover, On the DWS709 sliding compound miter saw measures 30.8 x 22.8 x 19.5 inches in dimensions.

On the contrary, the DWS709 miter saw is pretty much lightweight and weighs around 60 lbs. this makes it immensely portable and transportable to remote work areas. However, this does not reduce the cutting abilities of this saw. The DWS779 model measures 2 x 23 x 18.5 inches.

It performs one model slightly more massive than the other, getting diverged between the choices of two kinds of people; preferring portable or stable miter saw.

A power tool entirely depends upon its accuracy and work efficiency. Both of these factors can make or break the power tool. It is why you should know what you need for a particular task.

The DWS779 saw has a bevel angle cutting capacity of 0 to 47 degrees on both the sides right and left. This saw can also perform various cuts up to 2×14″ dimensional lumber at 90 degrees and 2×10″ at 45 degrees. It has several angles ranges from 0 to 60 degrees to right and 0 to 50 degrees to left.

Just like that, the DWS709 double bevel compound miter saw enables you to set and adjust various miter angles for up to 50 degrees left and 60 degrees right. It has a bevel angle cutting capacity of 49 degrees on both left and right sides. Further, this saw can achieve cuts up to 6 5/8 inches at 45 degrees and 95 inches at 90 degrees.

Both of the miter saws have several positive stops at the most frequently used angles to make the process of cutting more comfortable. It also saves a lot of time.

The DWS779 miter saw includes an integrated XPS laser guide that illuminates the cutline for ultimate précised and accurate cuts. However, the DWS709 miter saw does not come with a laser guide.

Despite having the same 15amp motor, 3800 rpm and12 inch carbide blade, the price of both the saws vary drastically. The DWS709 miter saw takes the lead in being the expensive one while the DWS779 is more towards the cheaper end.

It means that the DWS709 miter saw features advanced technology with premium cuts and accuracy but with a higher price. However, the DWS779 miter saw come in a very affordable range and increased stability but with a low dust collecting unit.

The two miter saws might have a lot of technical as well as structural differences between them, but there are a few similarities possessed by these two as well.

Both DWS709 and DWS779 miter saws from DeWalt have significant features that make them different from each other despite several prominent similar features. DeWalt is known to release several identical models each year, which makes it quite challenging to differentiate.

In this article, we tried our best to gather all the necessary information regarding both the models, including their functionalities, similarities, dissimilarities and their field of speciality. As far as the excellent quality and accurate cuts are concerned, miter saws have proven to be exceptionally durable and versatile.